Efficiency through Mob Design (a.k.a. How Four People Worked Faster by Sharing One Computer) 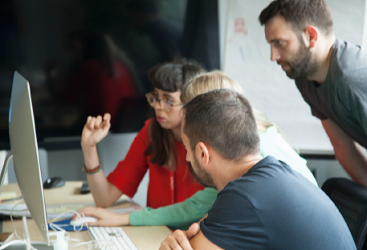 Today most people have two or three computers. So why would anyone make four people work together on one computer? And, who would be insane enough to force two designers, one marketer, and one product manager to take turns using the same design software on that one computer?

The answer: a design group at Vistaprint. In fact, this group demonstrated that in some situations “mob design” can move projects out the door faster—much faster—by eliminating project handoffs and delayed feedback loops.

When Marketing and Design Collaborate

We promote our products and services through special offers on across channels including websites, banner ads, and targeted emails to customers across the globe. Due to creative demand, we developed an internal agency to manage everything in-house—design teams layout web pages, ads and emails for each channel and work with marketers and product specialists to ensure that each offer and ad effectively engages our targets.

Despite the efficiencies of developing materials internally, the creative process takes time. Say the marketing team plans a special offer on backpacks and laptop bags imprinted with customer logos. They might propose a general idea for a banner ad consisting of 4-5 GIFs—but then it takes a full workweek to refine the concept, outline the storyboard, review and revise the design, and ultimately approve the piece.

As illustrated in Figure 1, only 9% of that time (11 hours) represents actual work. The other 91% (112 hours) are handoffs or wait time between steps in the process.

And if marketing, product management and design staffers don’t communicate well, additional iterations and approvals may be required which can stretch the schedule even further. These extended timelines can also cause friction between groups, e.g. designers complain about ambiguous input from marketers and marketers gripe that designers don’t understand the customer.

In April 2016, Adam Charlton, manager of our Global Design team, attended a conference on Agile software development. He was impressed by a session on “Mob Programming,” presented by one of its creators, Woody Zuill. In Mob Programming, a team of software developers and business analysts work on the same task at the same time. One “driver” sits at the keyboard, while the “navigators” (remainder of the team) discuss the task and work out a solution. Team members rotate in and out of the driver role every few minutes.

Having a full team work on one task might sound terribly inefficient, but according to Zuill, it works ext  remely well in practice. Questions about technology and customer engagement can be answered immediately, because the necessary technical skills and market knowledge are all there, in one place. And, the end solution reflects the best ideas of the group. While “mobbing” sometimes requires more people hours than individuals working separately, the increase in speed to market and quality of output substantially outweighs the labor investment.

Adam was struck by the similarities between software development projects and Vistaprint’s design processes. Both require collaboration among people with diverse knowledge and skillsets. Both fall victim to variable communication and extended wait times when handed off from person to person. So, Adam decided to conduct the world’s first “Mob Design” experiment at Vistaprint.

With a goal of moving at least one banner ad storyboard from concept to approval in two days, a group of 12 volunteers was assembled into three teams of four. Two of the teams were located in Vistaprint’s offices in Barcelona, Spain, and the third was split between Barcelona and Waltham, MA. Each team included two designers, one marketing rep, and one product manager—and they worked together for two hours per day over the course of two days.

Team members rotated in and out of the “driver’s seat” every seven minutes. Some at the keyboard had no prior experience with graphics tools. So they were coached on the basics, from clicks to command sequences, which made some other members of team uncomfortable at first.

The results of our experiment exceeded expectations. The continuous collaboration and feedback built into Mob Design eliminated the need for “handoffs” and written feedback. Productivity and quality soared, because designers’ questions were answered instantly while marketers and product owners better understood the design options. All parties were invested in the final designs, so “approval” became an automatic outcome rather than a hurdle to overcome.

Mob Design also advanced the relationships among the groups. Designers gained a better understanding of the objectives and expectations of the marketers and product managers. The marketers and product experts learned to appreciate the capabilities of the designers and their tools. Everyone got better at verbalizing their requests in ways that were clear and actionable.

Just as compelling, is the time savings—with the total cycle from concept to approval reduced by 79%, from a full week to just over day.

In our post-project survey, every participant agreed that the experience was not only more collaborative, but more fun. And, 80% indicated that it strengthened their relationships with the other participants.

Make four people share one computer? It’s not such a crazy idea after all. The Mob Design exercise at Vistaprint was successful because both designers and marketers benefited from:

One team member summed up the experience by saying, “[What worked well was] being all together in the same room, marketing and creative. Being able to brainstorm ideas, give input, modify and [improve] instantly as a creative was extremely helpful. I think it was a very productive way of working. Huge time saver!” 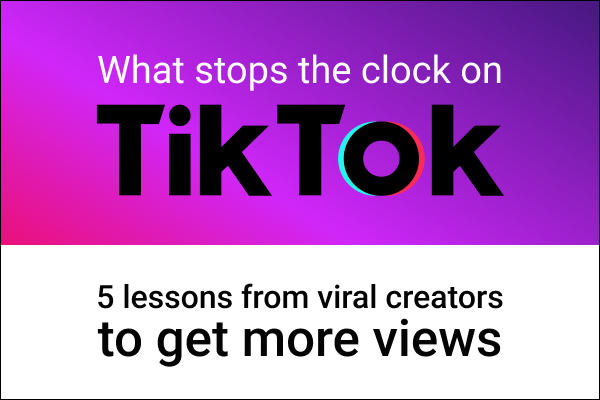 What Stops the Clock on TikTok?

A recent review of over 100 TikTok videos has unlocked new insights for creators, influencers, brands and agencies. Here are five simple lessons on how to use engagement and arousal to get more views.

1. HOOK VIEWERS EARLY. Gone are the days of building to the hook. In the TikTok age, you need to … 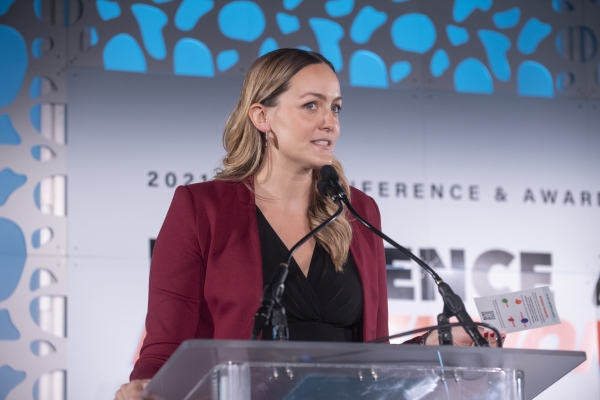 Can in-house agencies break their own records in 2022? Industry reports reveal they made fresh gains in team size, popularity, skills and efficiency last year. While it’s a tough act to follow, here’s how IHAF sees the in-house model advancing in 2022.

From Cost Reduction to Advantaged Capability